2. Never go above 80 mph in Virginia.
If you are given a speeding ticket in Virginia it is a traffic infraction with a maximum fine of $250. However, if you are charged with reckless driving due to excessive speed in Virginia it is a criminal offense – a class 1 misdemeanor— which has serious implications including a maximum fine of $2500, up to a year in jail, up to 6 months suspension of driving privileges, and a criminal record. Speeding is the most common offense that results in a reckless driving charge, and in Virginia, driving 20 mph above the posted speed limit or driving at any speed greater than 80 mph regardless of the posted speed limit is considered reckless driving.

3. Texting while driving is as dangerous as drinking and driving.
With the increasing prevalence of technology in our society, distracted driving is becoming a dangerous epidemic. AAA now says that distracted driving accounts for 25 to 50 percent of all accidents, with texting while driving being the most common distracted driving activity by far. Studies found that when drivers were on handheld or hands-free cell phones their breaking reactions were delayed and they were involved in more traffic accidents. Comparatively, intoxicated drivers exhibited a more aggressive driving style, followed the cars in front of them more closely, and applied more force while breaking. When driving conditions and time on task were controlled for, the impairments associated with using a cell phone are just as profound as those from drinking and driving. Drivers using a cell phone are 4x more likely to be in a crash than those who are not. DC and Maryland have taken the initiative and prohibited handheld cell phone use and texting for all drivers, while in Virginia there is no prohibition on cell phone use while driving, however, all drivers are prohibited from texting.

Medical Errors: One of the Leading Causes of Deathblog 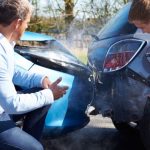 What to Do When You Get in a Car Accidentblog